The fifth season of the Grant era ended with a loss in the second round of the National Invitational Tournament. One of the most contested games of the season featured tense moments between a former Flyer, Rodney Chatman, and young Dayton star, DaRon Holmes II, who went chest to chest after a hard foul on Toumani Camara.

The game also included a number of plays that would have seen Dayton play another home game this season – against former all-team rival Xavier – had they gone the other way. That could be said of a number 11 Dayton losses. It was his fifth loss by two points or less.

That game ended with Vanderbilt’s 7-foot center Liam Robbins blocking a shot from Kobe Elvis, who was making his second start at point guard with Smith sidelined with an ankle injury, less than a second away. to play in overtime.

Dayton’s Kobe Elvis has a shot blocked in the final seconds of overtime by Vanderbilt’s Liam Robbins in the second round of the NIT on Sunday, March 20, 2022, at Memorial Gymnasium in Nashville, Tennessee. David Jablonski/Staff 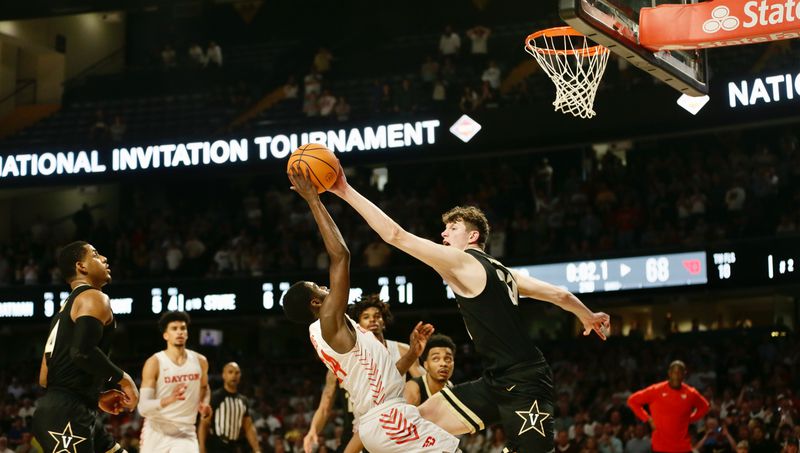 Dayton’s Kobe Elvis has a shot blocked in the final seconds of overtime by Vanderbilt’s Liam Robbins in the second round of the NIT on Sunday, March 20, 2022, at Memorial Gymnasium in Nashville, Tennessee. David Jablonski/Staff

Dayton was lucky to tie the game because Chatman, a sixth-year player who scored nine points against his former team, missed two free throws with 12 seconds left. The Flyers advanced the ball beyond half court and called a timeout with 7.8 seconds left. They put the ball in the hands of Elvis.

“We tried to come down and make contact,” Grant said. “Unfortunately, it didn’t work our way.”

Although the game went to the final game, Dayton lost the game in part due to second chances Vanderbilt got in the last minute of the second half and again late in overtime.

Dayton had a 63-61 lead after a Camara layup with 1:08 left in regulation. Vanderbilt star Scotty Pippen Jr., whose father Scottie Pippen, the NBA great, watched from the front row, missed a jump shot with 41 seconds left, but Quentin Millora-Brown grabbed the offensive rebound and scored on a lay-up to tie the game at 63-63 with 23 seconds left.

Elvis returned the ball on Dayton’s next possession. Vanderbilt’s Jordan Wright went the other way on the fast break. Holmes blocked his lay-up attempt in the dying seconds.

In overtime, Dayton overcame a four-point deficit with four consecutive free throws from Blakney and Camara to tie the game. Then Pippen missed a jump shot with 53 seconds left. Robbins grabbed the offensive rebound. Wright missed a layup. Then Robbins got the board again, this time scoring what turned out to be the winning basket.

“The 50-50 balls and second hits they got at the end of the game, they didn’t have many,” Grant said, “but they had timely ones that made the difference in time. regular and in overtime.”

Dayton overcame an early 18-8 deficit to lead 26-25 at halftime thanks in part to eight halftime points from Moulaye Sissoko. Holmes also had eight points in the first half and finished with 17 points on 8-of-11 shooting. Elvis scored 20 points on 8-of-21 shooting.

“That was one hell of a match, man,” Stackhouse said. “Thanks to Coach Grant and his team. Those young guys really pushed us to the limit. It took everything we had to win that game.